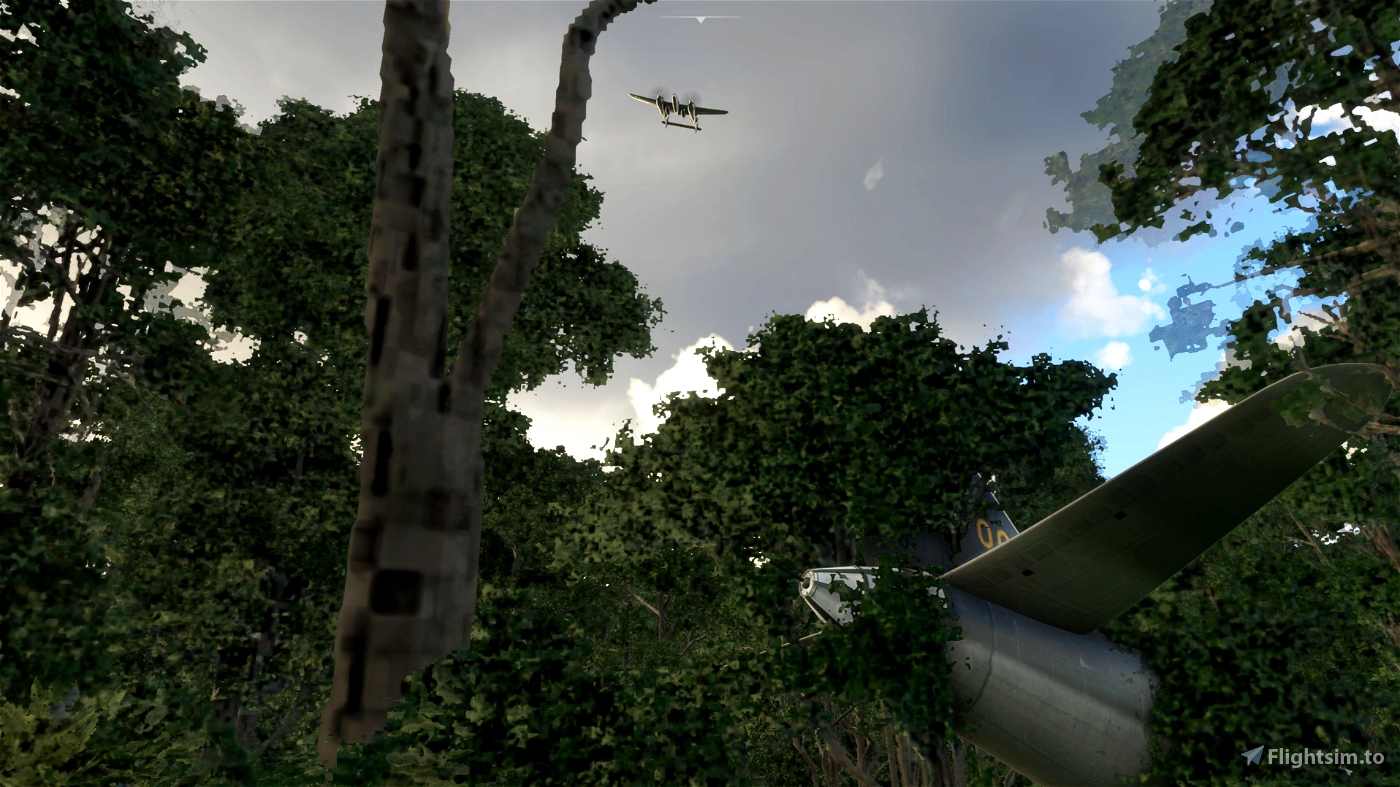 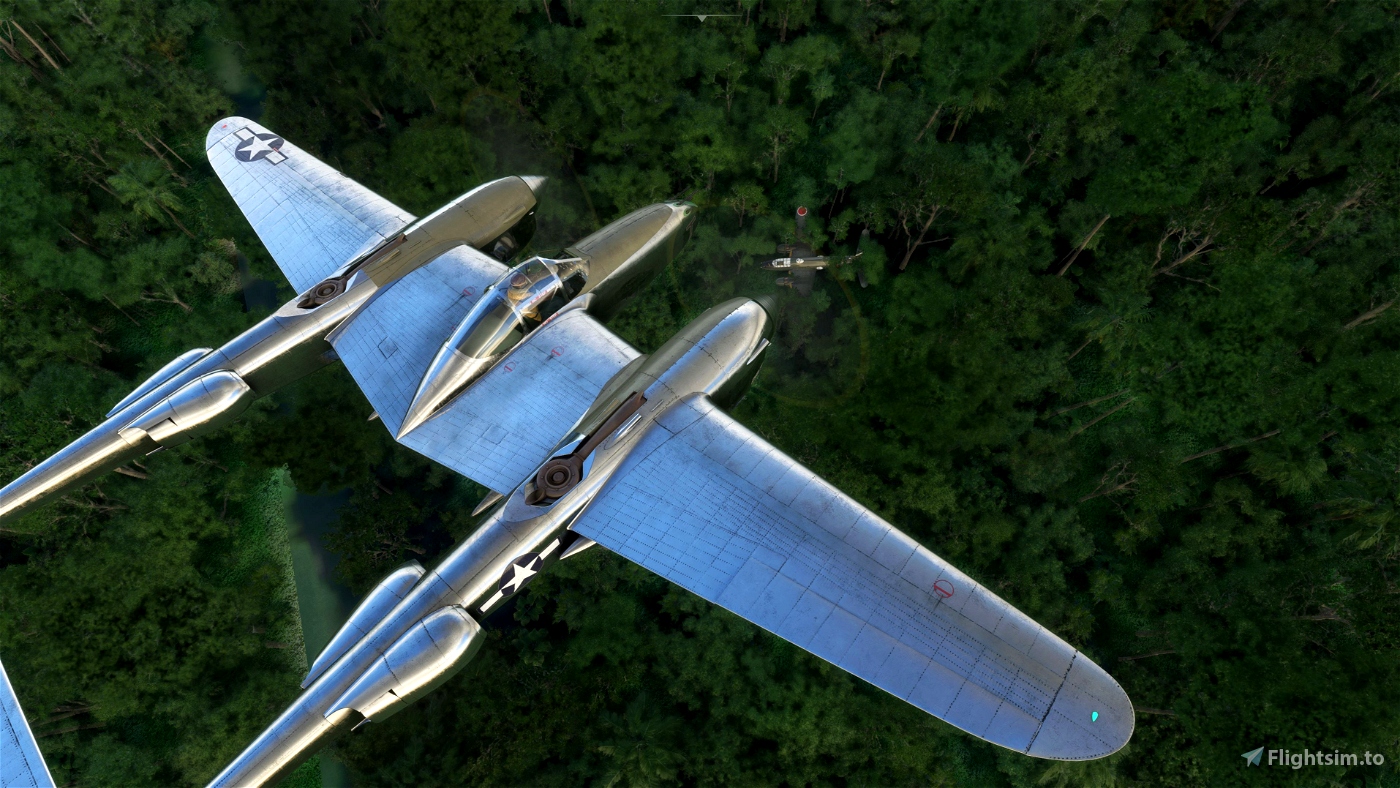 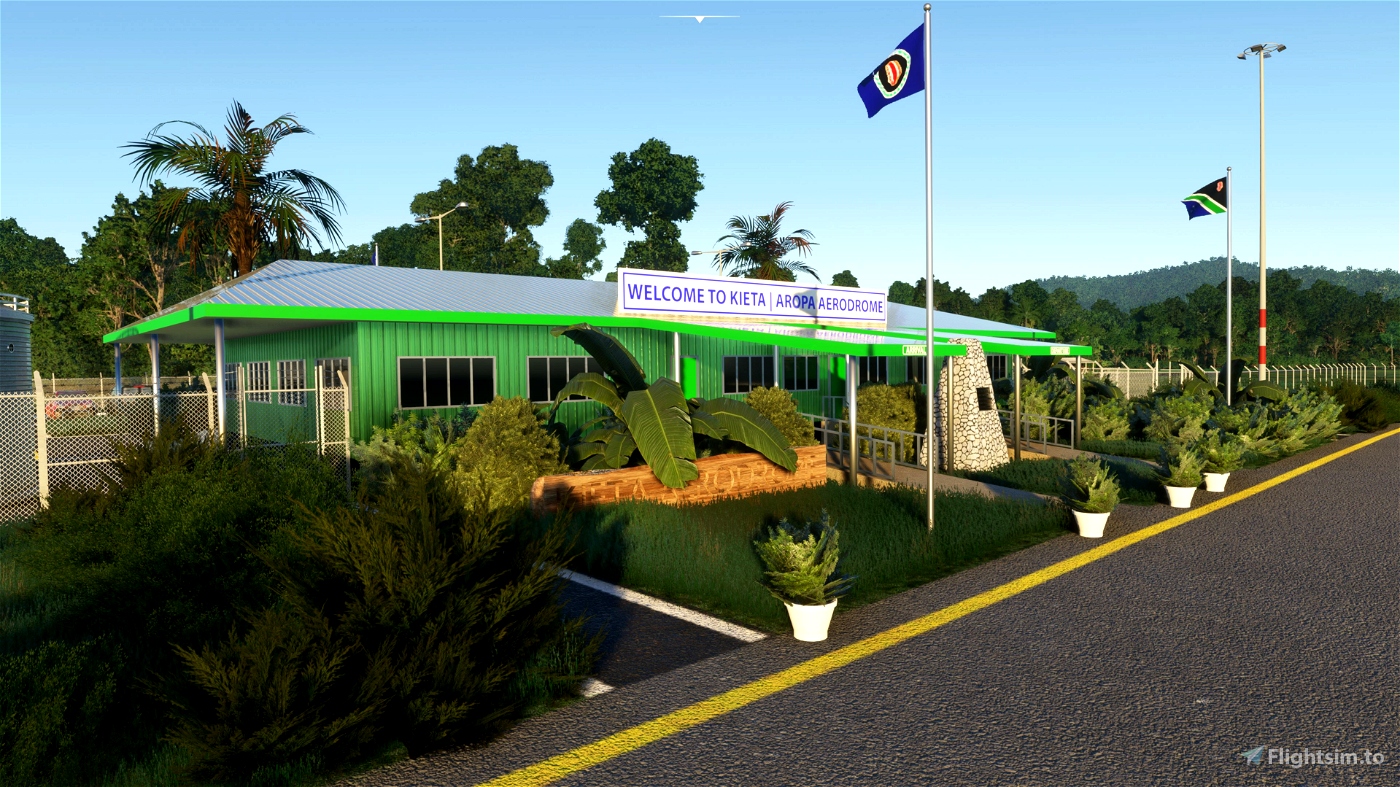 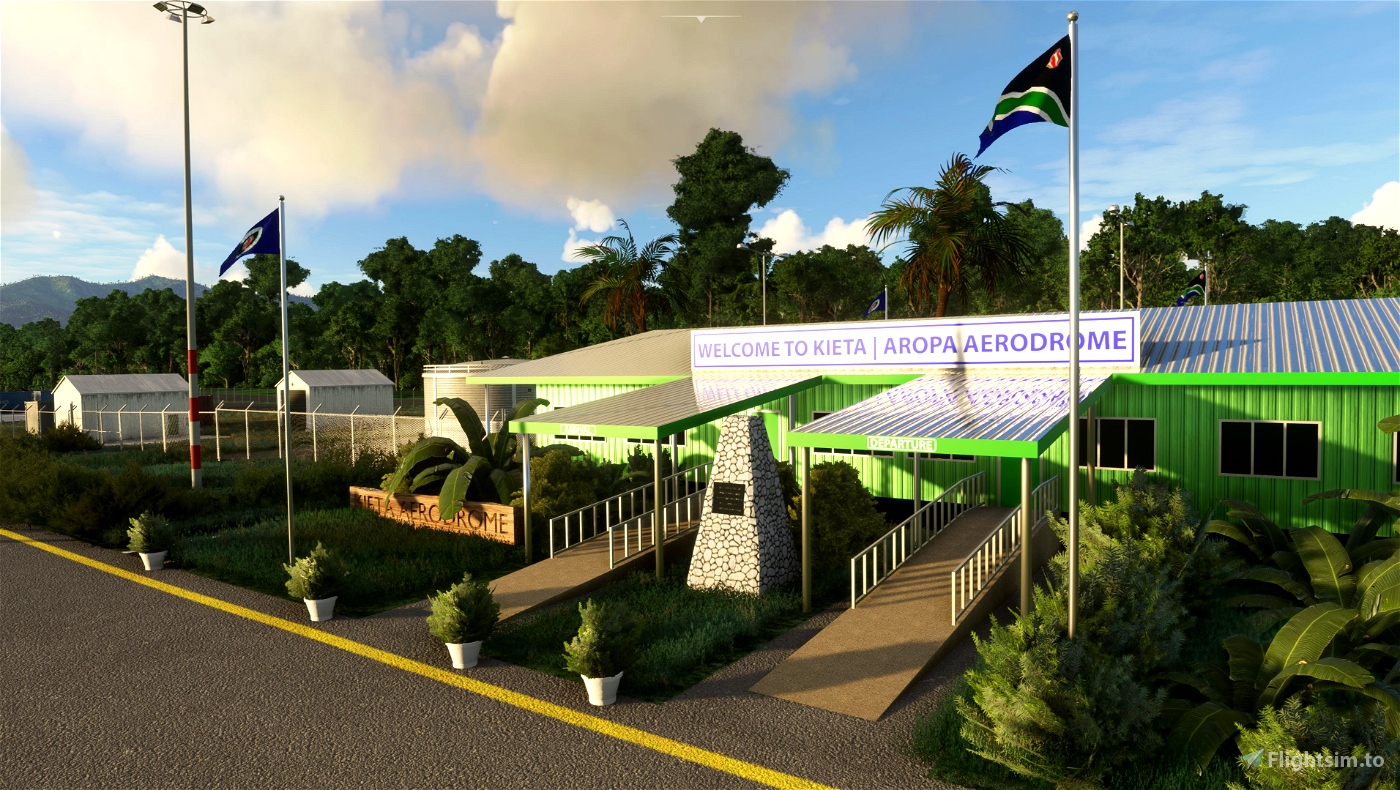 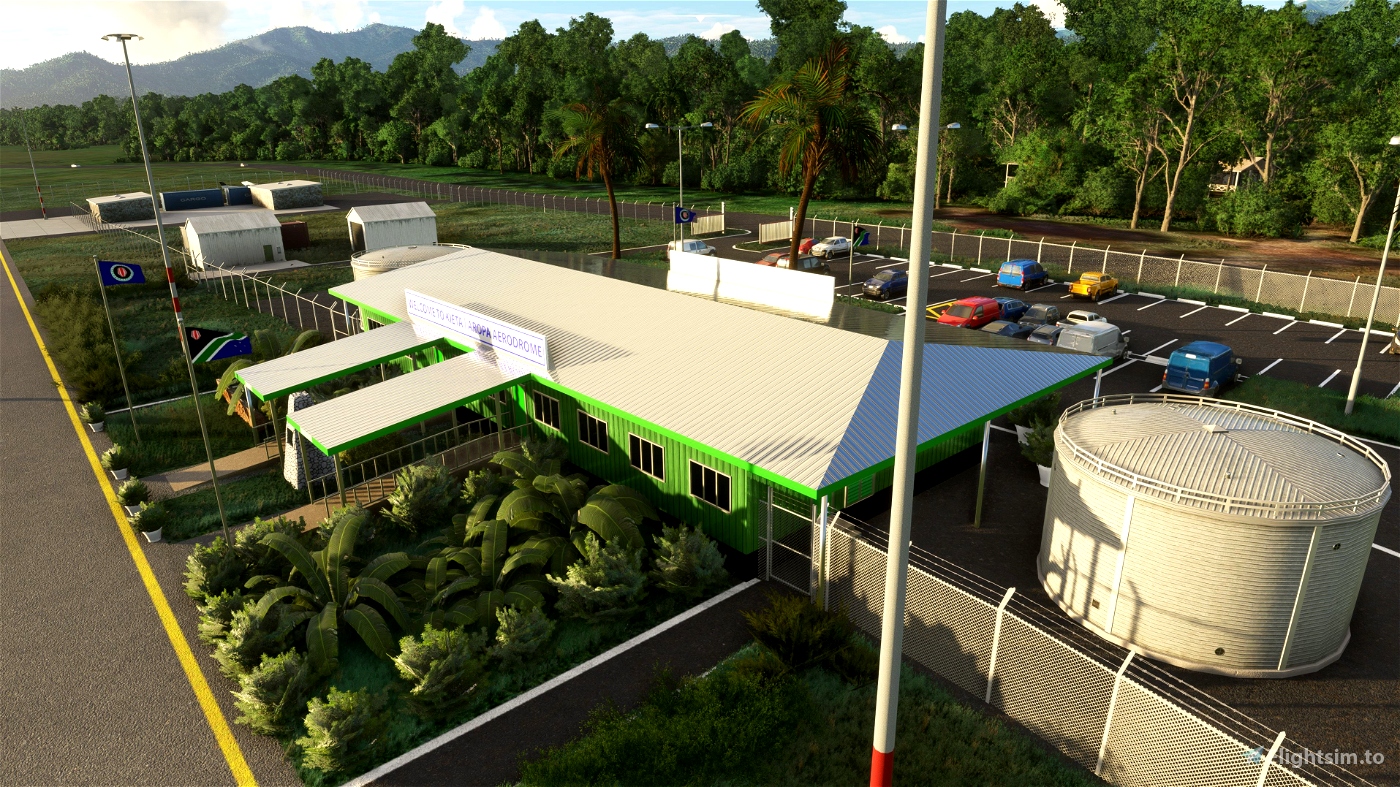 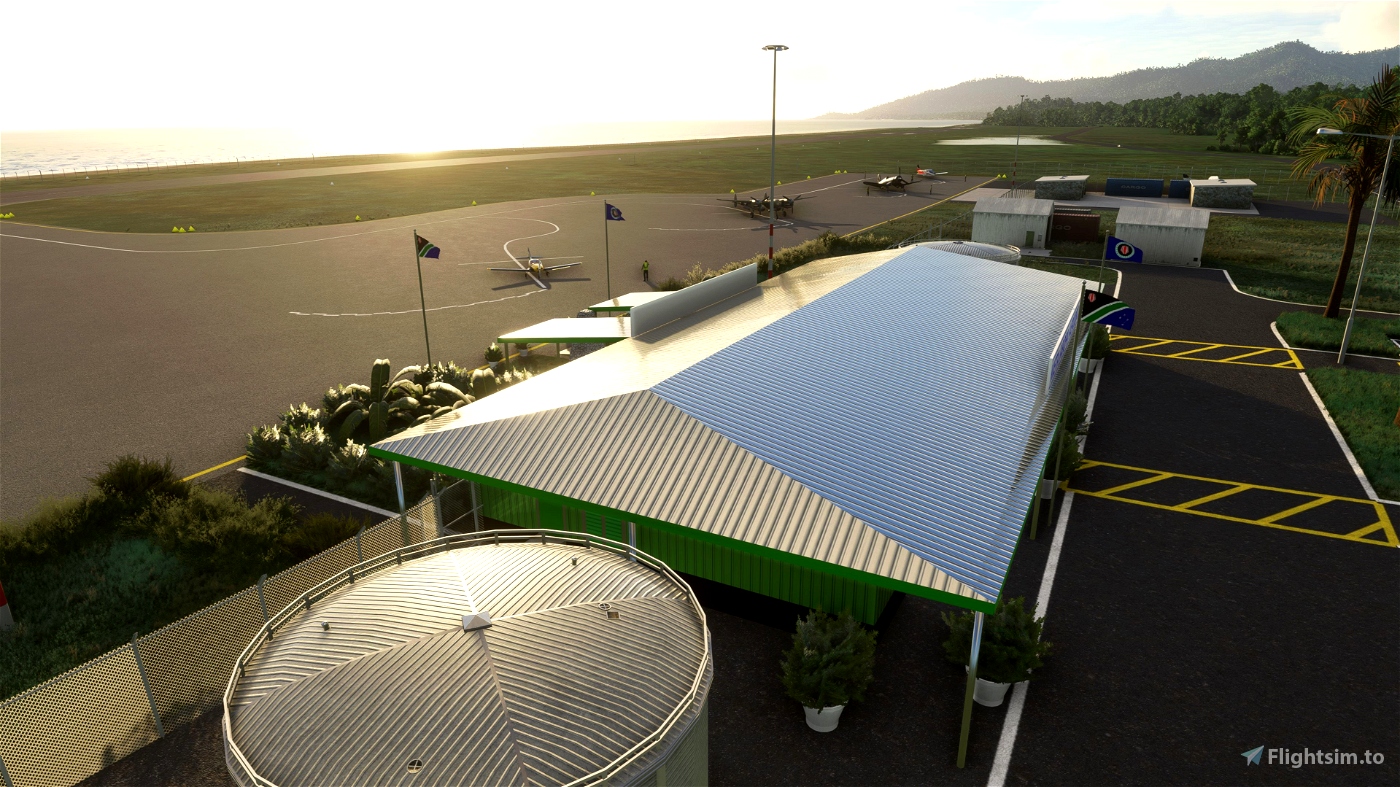 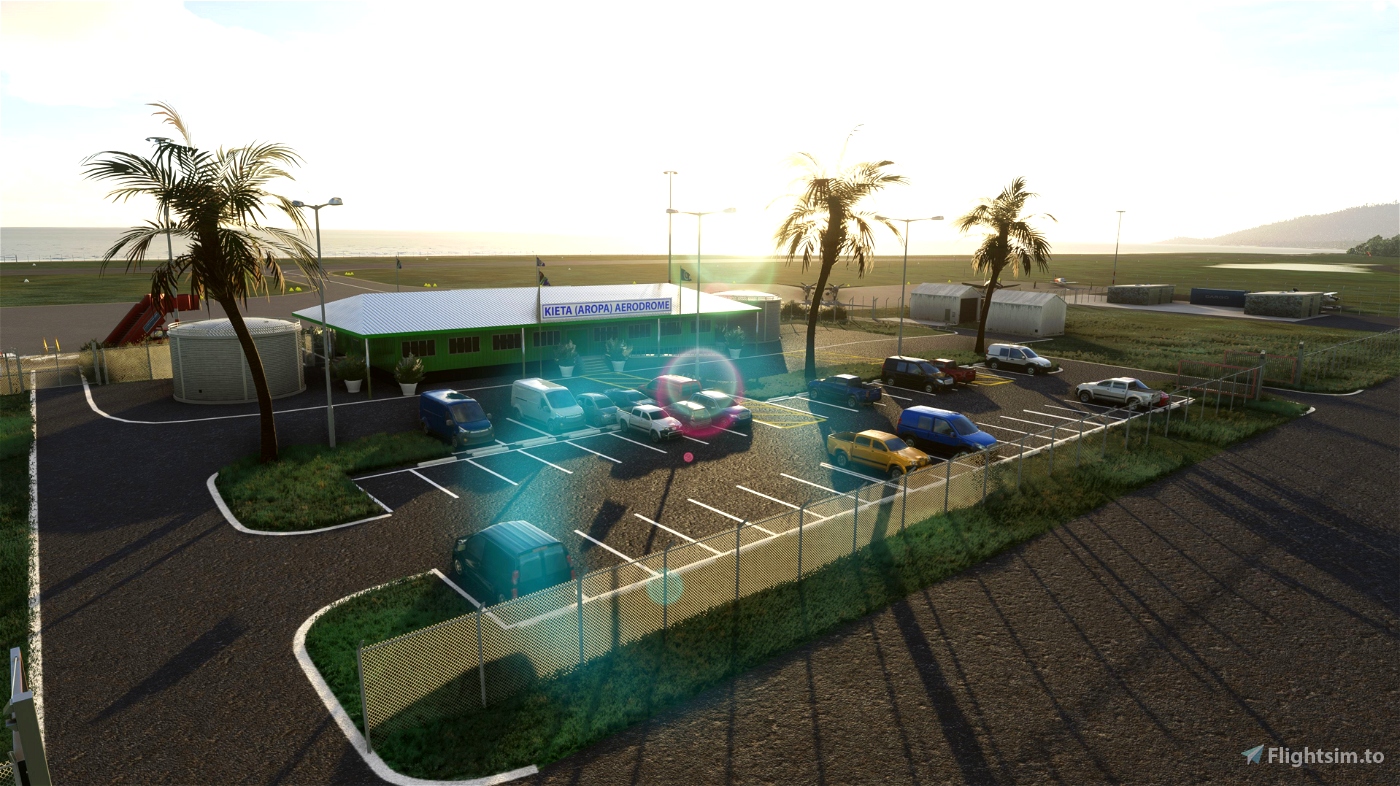 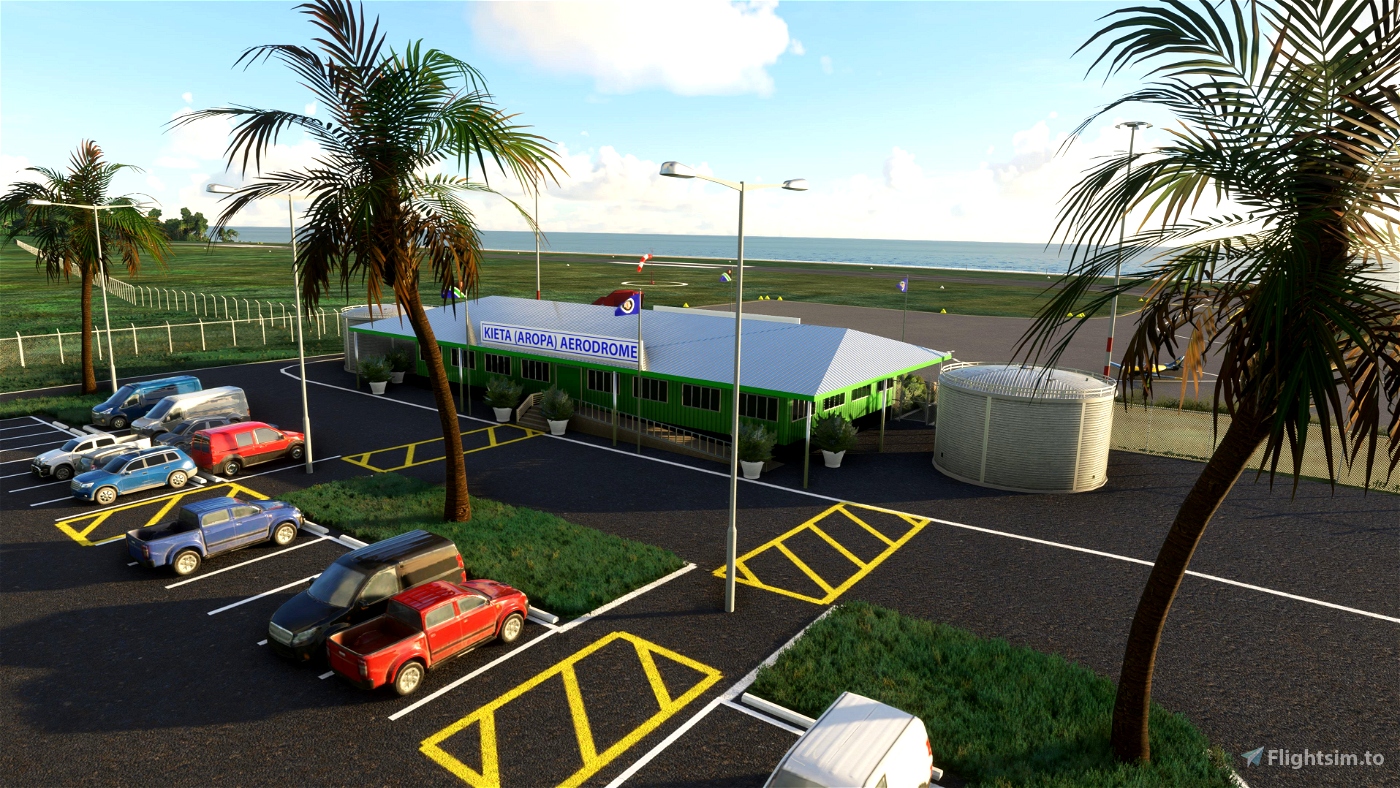 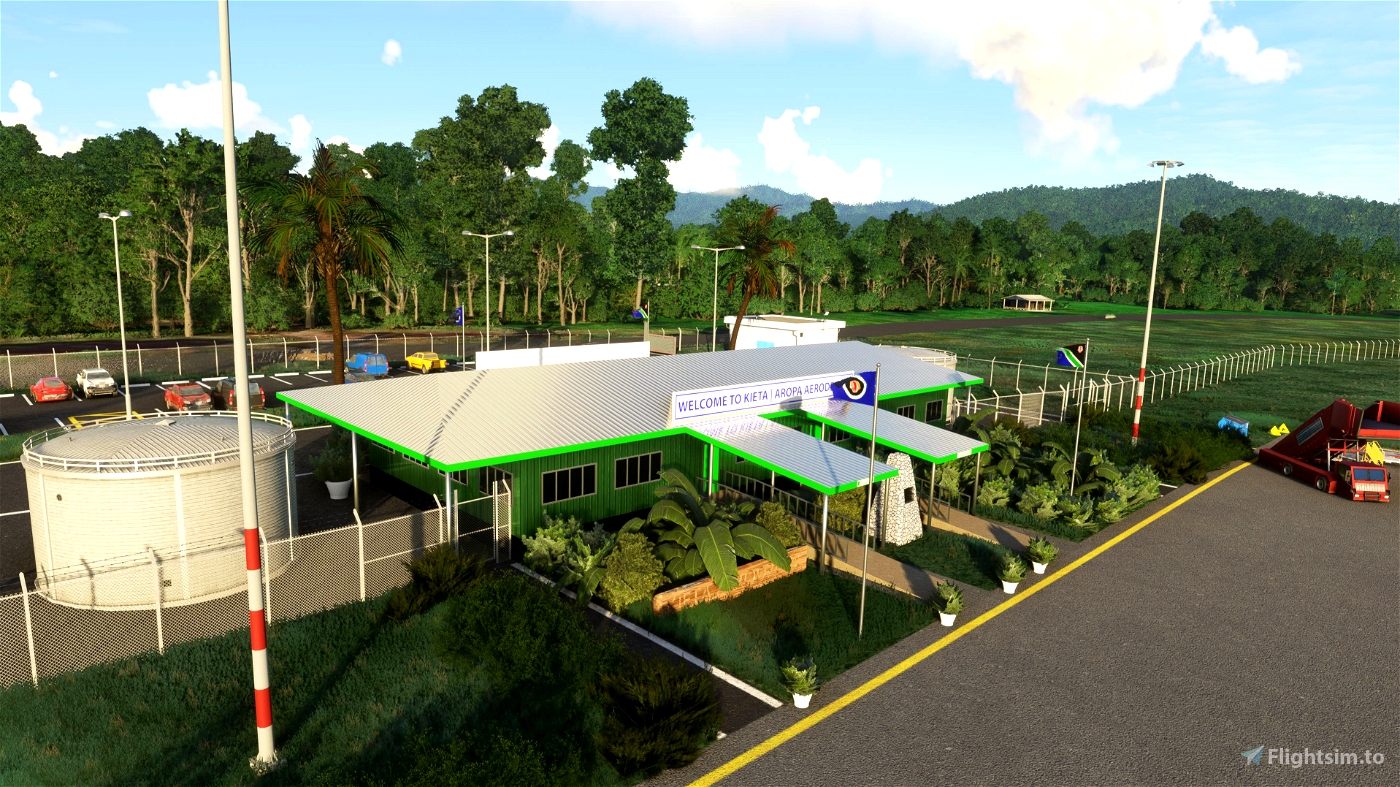 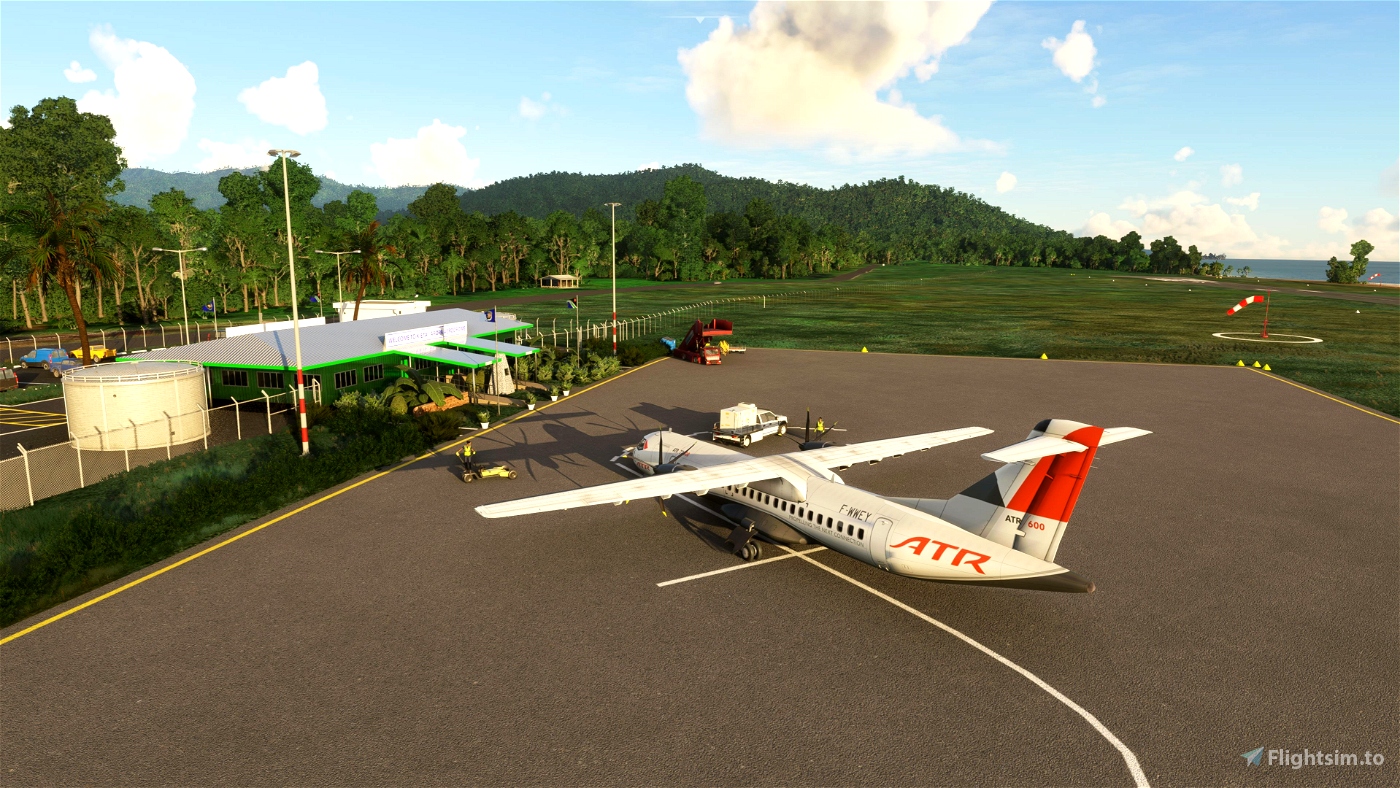 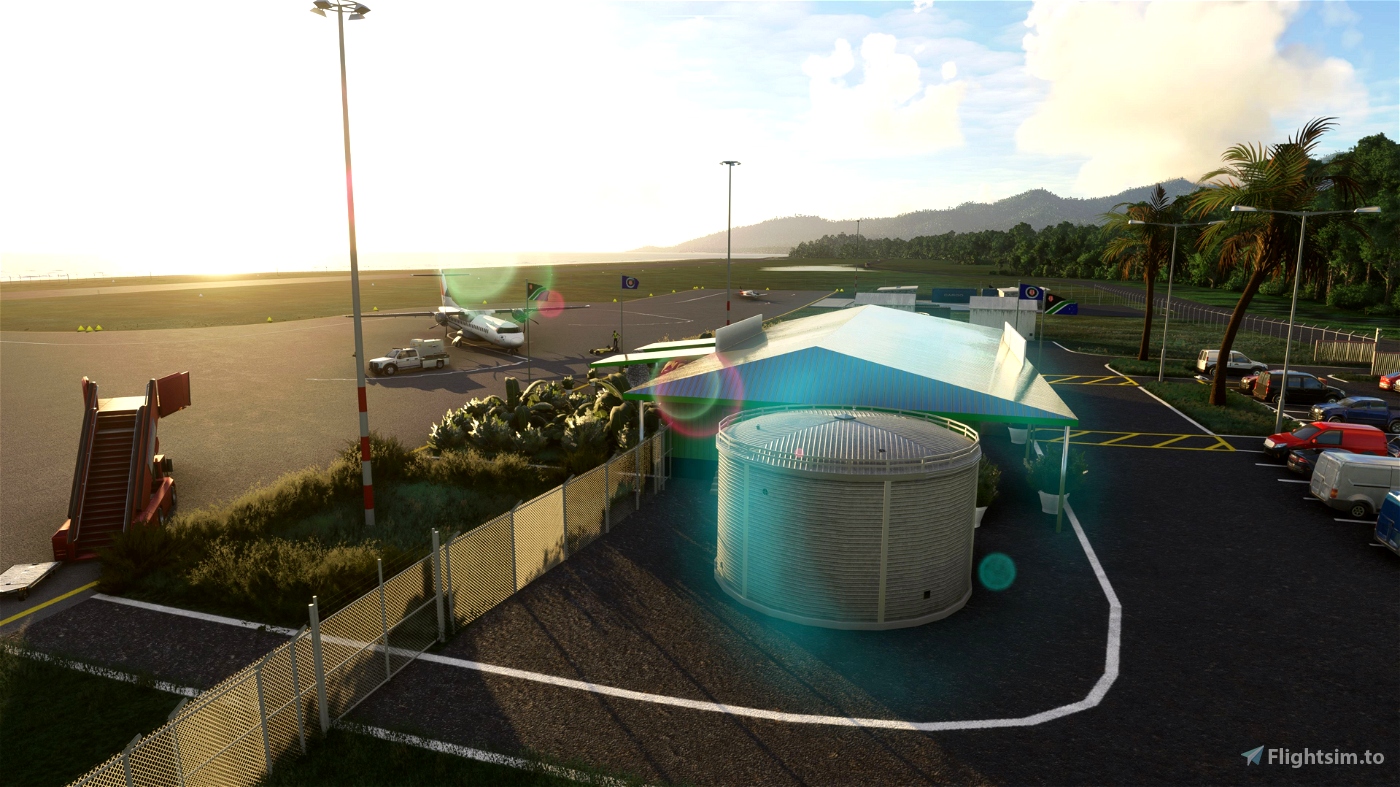 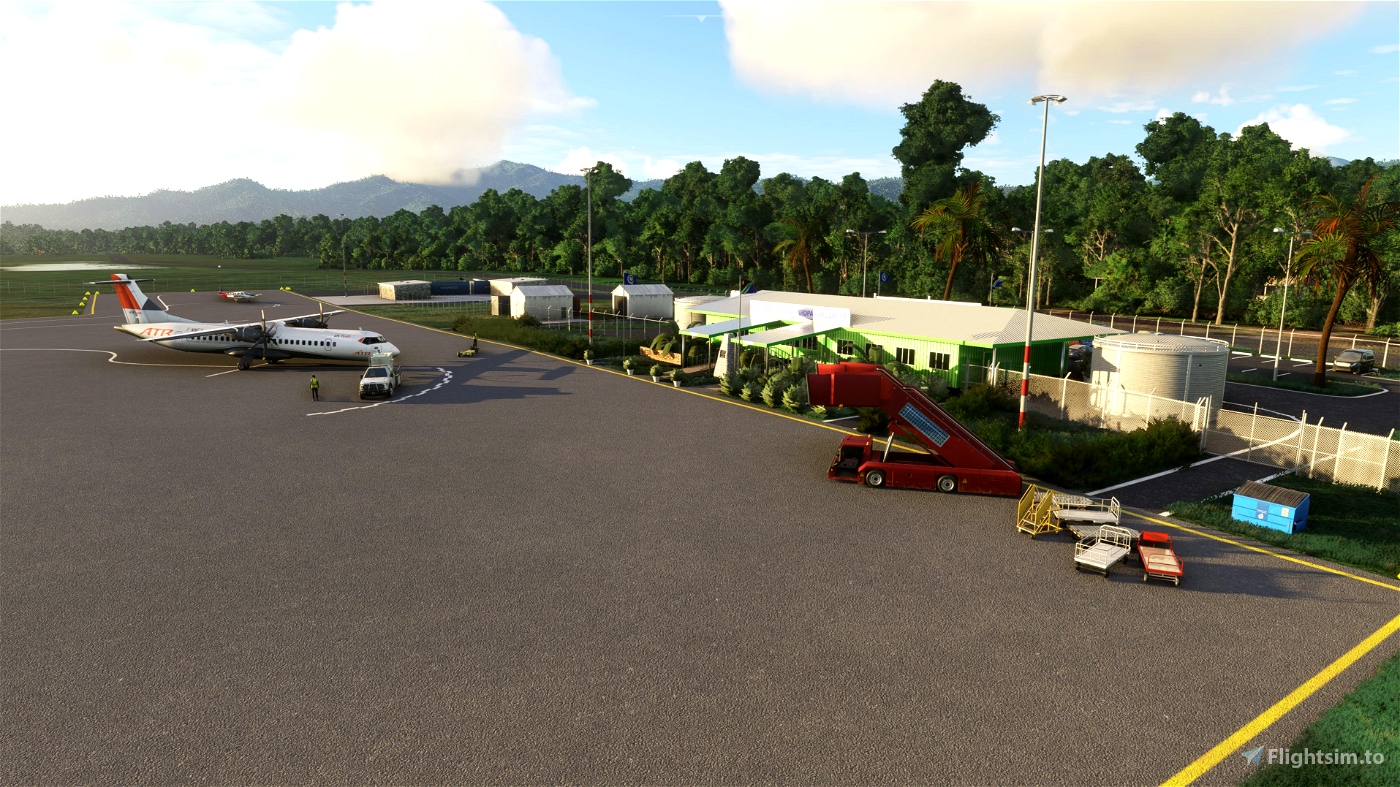 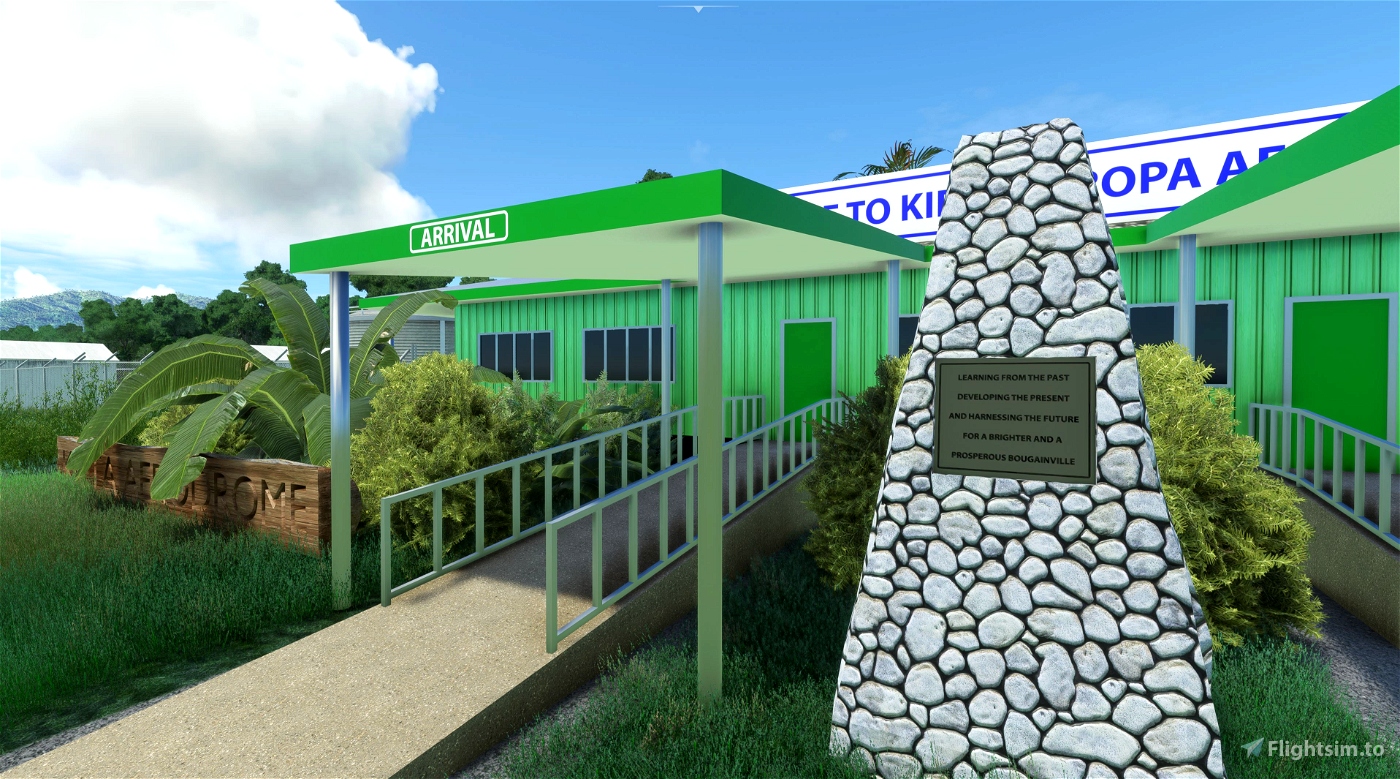 Aropa Airport was my connection to the outside world during my childhood and first memory of being around aircraft... so being my "home airport", I thought I'd try to fix it up a little from how it's shown in the default scenery.

Bougainville is an island about the size of Long Island, New York, with subtle difference like having five volcanoes (though only 1 is active, and another is fuming at 8,907 feet msl).  The population is estimated at around 300,000, where the people speak 23 completely different languages... many have more than one dialect, such as the language spoken in the region of this airport, Nasioi,  which has four dialects.

Geographically the island is part of the Solomon Island chain but politically has been part of Papua New Guinea since they gained independence in 1975 from what was then a UN territory governed by Australia.  Bougainville tried to secede from Papua New Guinea in December 1988, which sparked a 10 year long war, (rebels were armed with WWII American munitions stored in bunkers and homemade crossbows/shotguns) which led to about 20,000 civilians being killed by PNGDF.  The island once known as being part the North Solomons Province, is now referred to as the  Autonomous Region of Bougainville, still technically part of  Papua New Guinea.  They hope to be recognized as their own independent nation soon.

Aropa Airport has seen many changes since it's inception in World War II: initially a grass strip used by the Japanese, that was bombed by the Allies.  It later became a paved international airport with direct flights from Australia (due in part to the world's second largest open pit gold/copper mine several miles to the north west).  Kieta (the nearest town) was the capital of the province for several years, before it was moved to Arawa, which had become the largest town on the island.
During the civil war, Aropa Airport was made inoperable when rebels cut several deep ditches across the runway to keep PNGDF aircraft from landing on it.

The airport was repaired and re-opened in 2014, with a new terminal building and apron that's in better condition than it was prior to the war.  I’ll admit my ability to model and texture anything in Blender is less than ideal; so as always, open to tips or suggestions to make things look better.

This scenery just fixes up the runway a little (adding mid-runway turn-around and PAPI lights for runway 14) and the apron has been updated from what appears to be old data used by Bing maps (I think stock scenery was based off imagery prior to 2014).  Pretty much all objects are stock, except the terminal building, cones, and flags.  I've tried importing some more tropical vegetation but have been unable to figure that out so far.

Speaking of the flags, they're texture mods of trfsto's very helpful addon "Windy Things", that you'll need to download and install in order to see them in this scenery: https://flightsim.to/file/14024/windy-things

I've also fixed the coastline around the airport a little, as well as added "two tree" island to the north (which was missing from stock scenery).  Surprisingly an island to the south east that didn't form till the late 1990s is part of the stock scenery.  I also fixed a hill of water in the ocean (and elevated rivers) near the coastal end of the Arawa Airstrip (several miles to the north-west of Aropa)... yes.. that should probably be its own package; but technically Arawa Airstrip isn't an airport anymore--hasn't been open since 1989, and the runway isn't usable.

I’ve also included a partial model of the Japanese G4M1 “Betty Bomber” created by Neil Wilson who made this available for “non-commercial use” from https://sharecg.com/v/79795/gallery/5/3D-Model/Two-For....G4M1-G4M2-Betty..  This model has been placed at the crash site of Japanese Admiral Yamamoto: He was the reluctant admiral who helped plan the attack on the Pearl Harbor, and was later shot down in southern Bougainville by American P-38s sent to intercept him on his flight from Rabaul.

Create a free account now to be able to to keep track of your mods and their latest updates without struggle.
Dépendances

Buy me a coffee

Looks like great scenery, but where exactly is the Betty Bomber? Did not see a POI, for it, is there a longitude and latitude for it?

Thanks. I debated about setting up a POI for this, but decided for now I'd leave it off so as not to make it too easy to find; but I might add it in a future update. I'd say you could do a search for the location; but undoubtedly you'd find the Wikipedia entry giving the wrong coordinates. So, try this: 6°47'12"S 155°38'46"E.