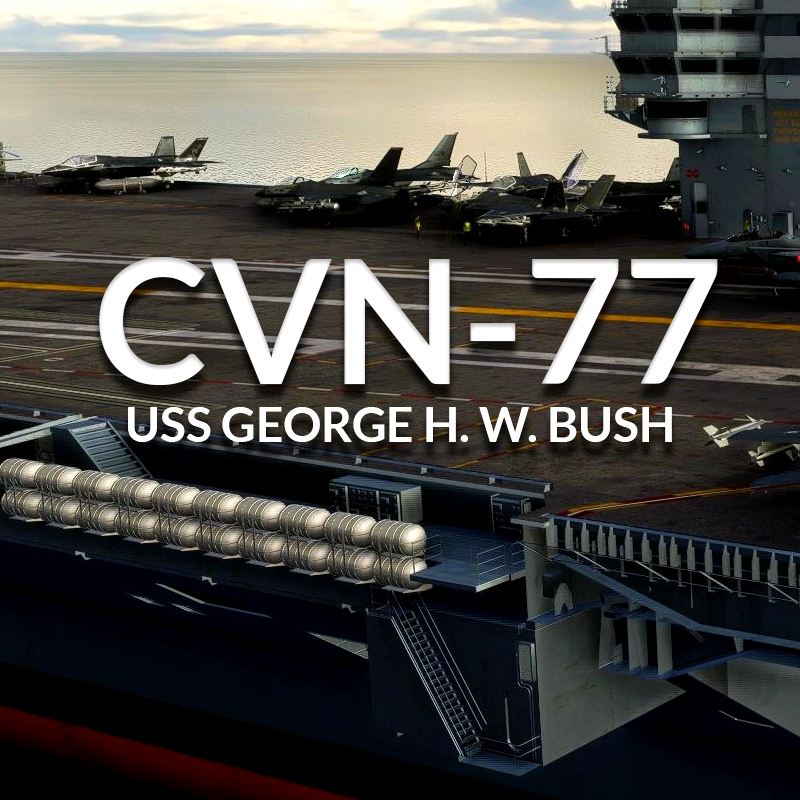 USS George H.W. Bush (CVN-77) is the tenth and final Nimitz-class supercarrier of the United States Navy. The carrier entered operations in 2009 and it currently operates from its homeport in Naval Station Norfolk, Virginia. We created a very detailed representation of USS George H.W. Bush functional with any aircraft on MSFS.  FEATURES Incredible level of detail on the modeling of the CVN-77 USS George H.W. Bush Carrier, with full PBR texturing. Functional catapult and arrestor cables... 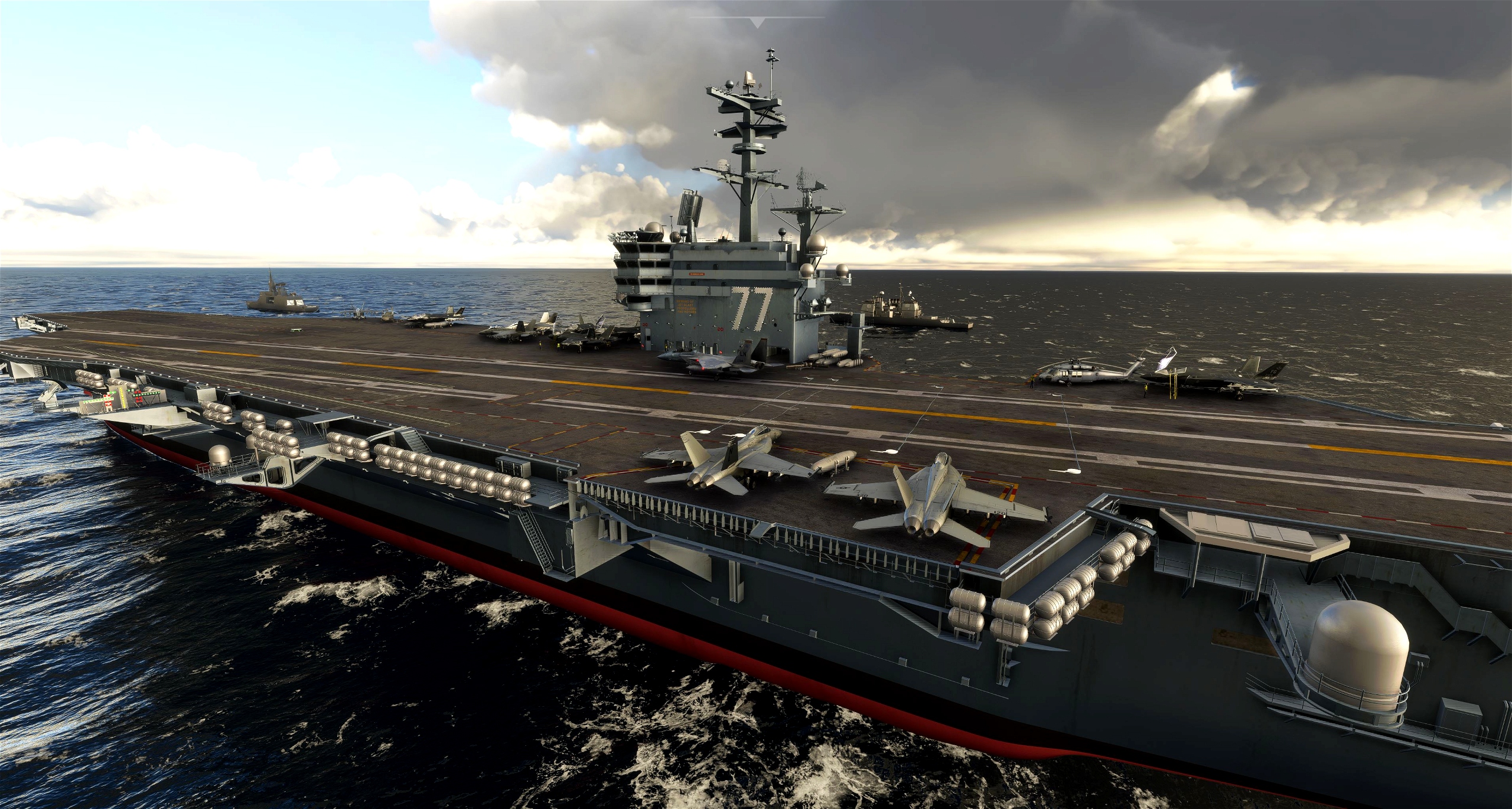 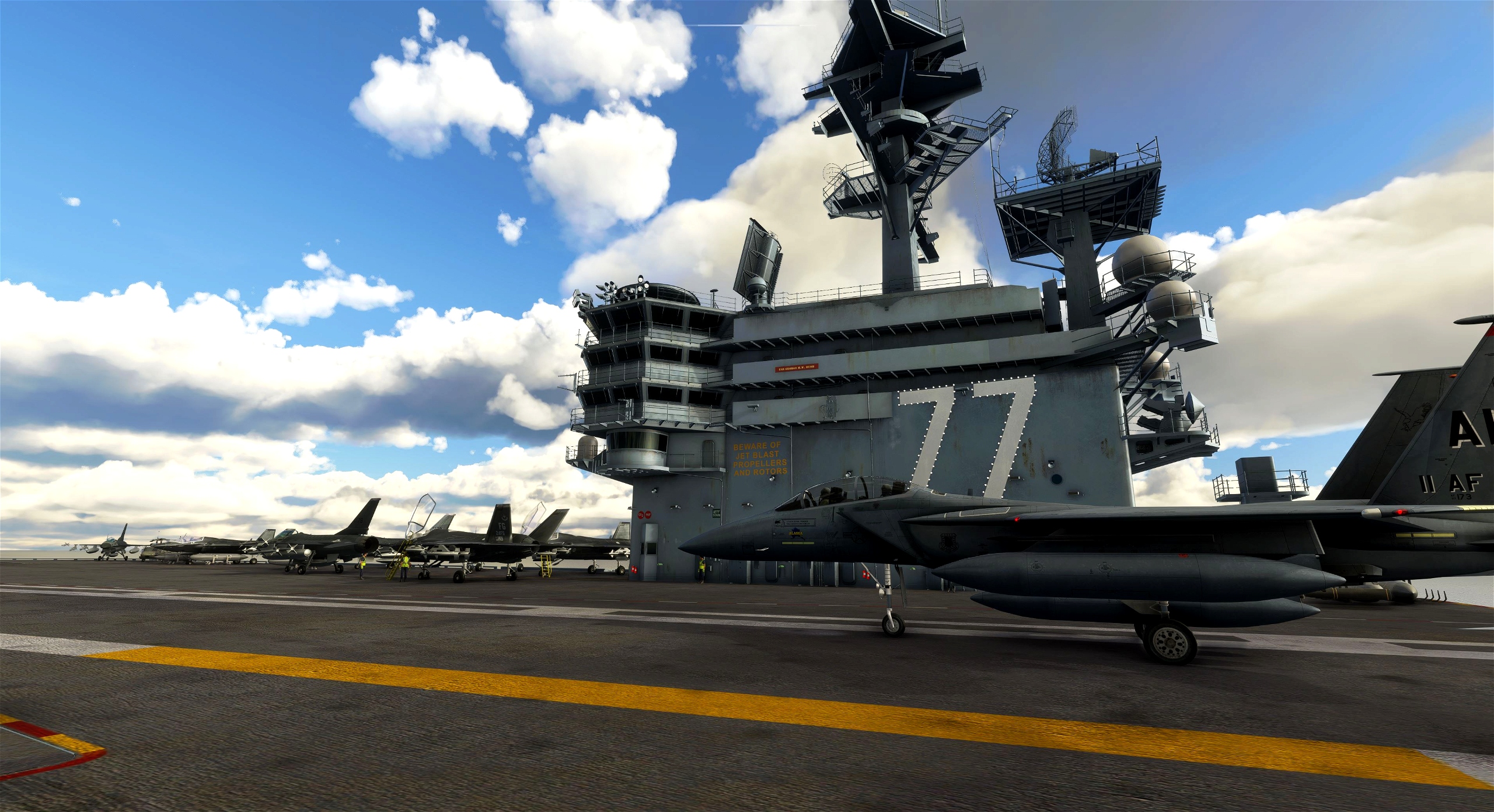 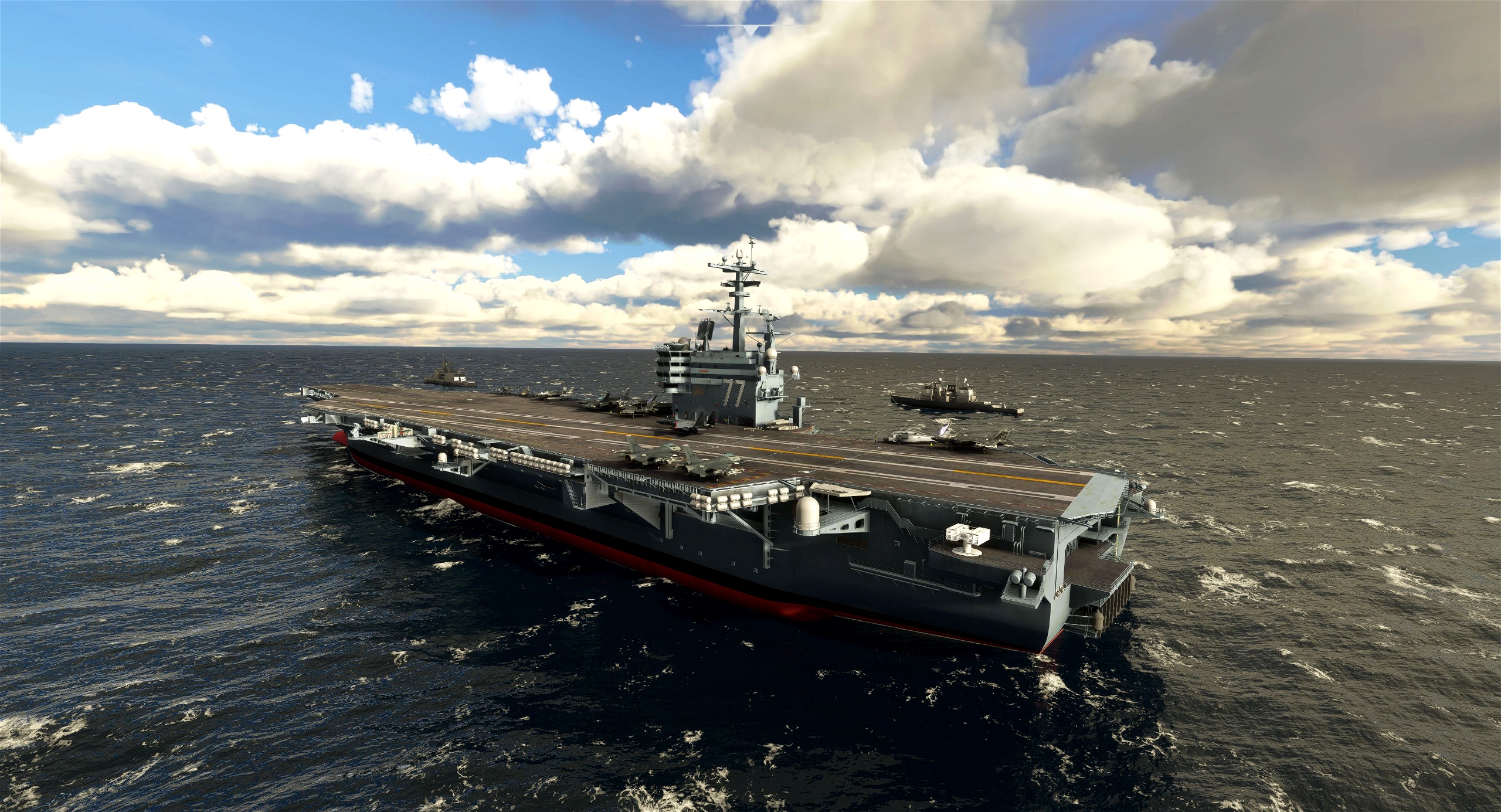 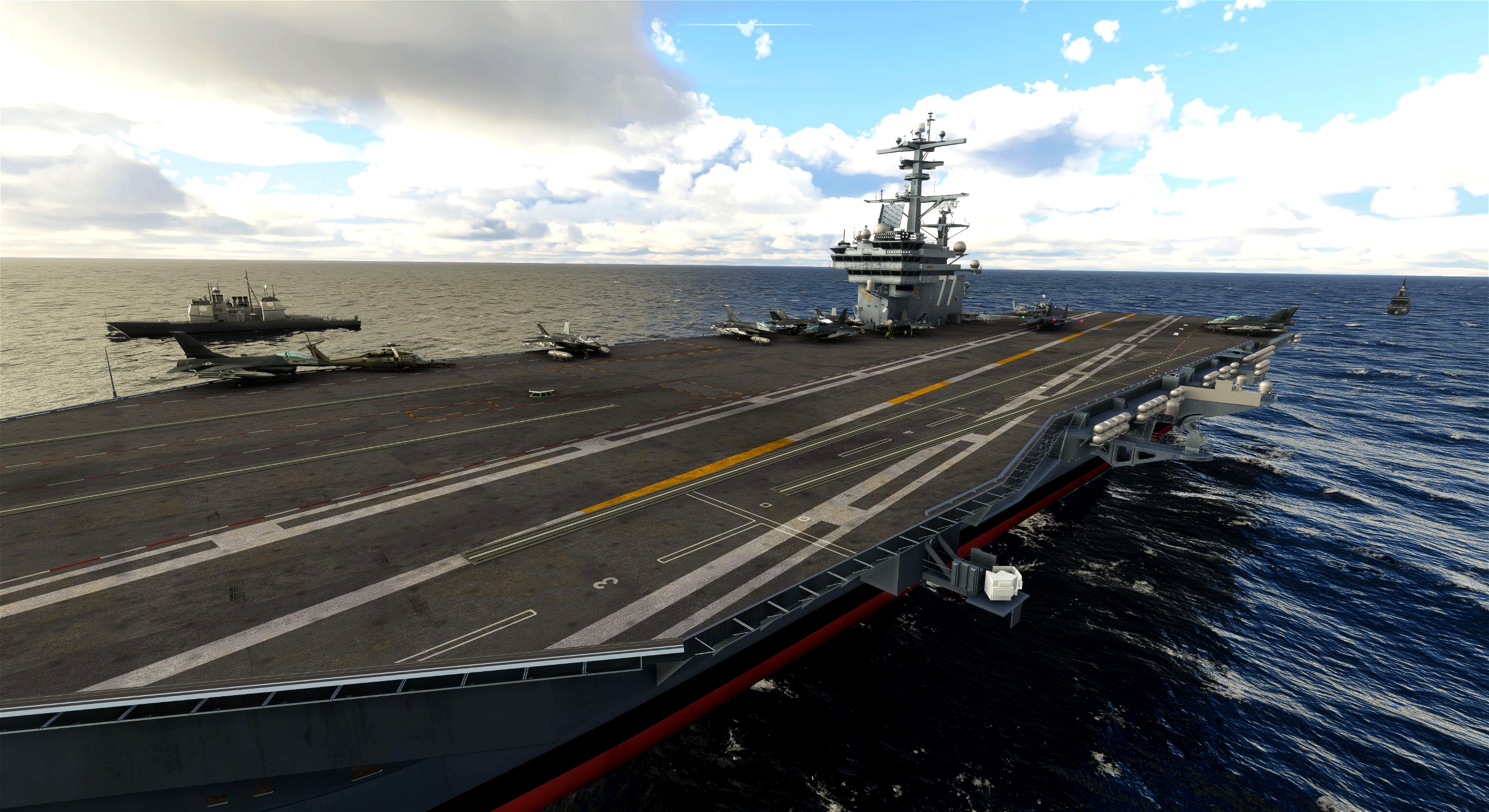 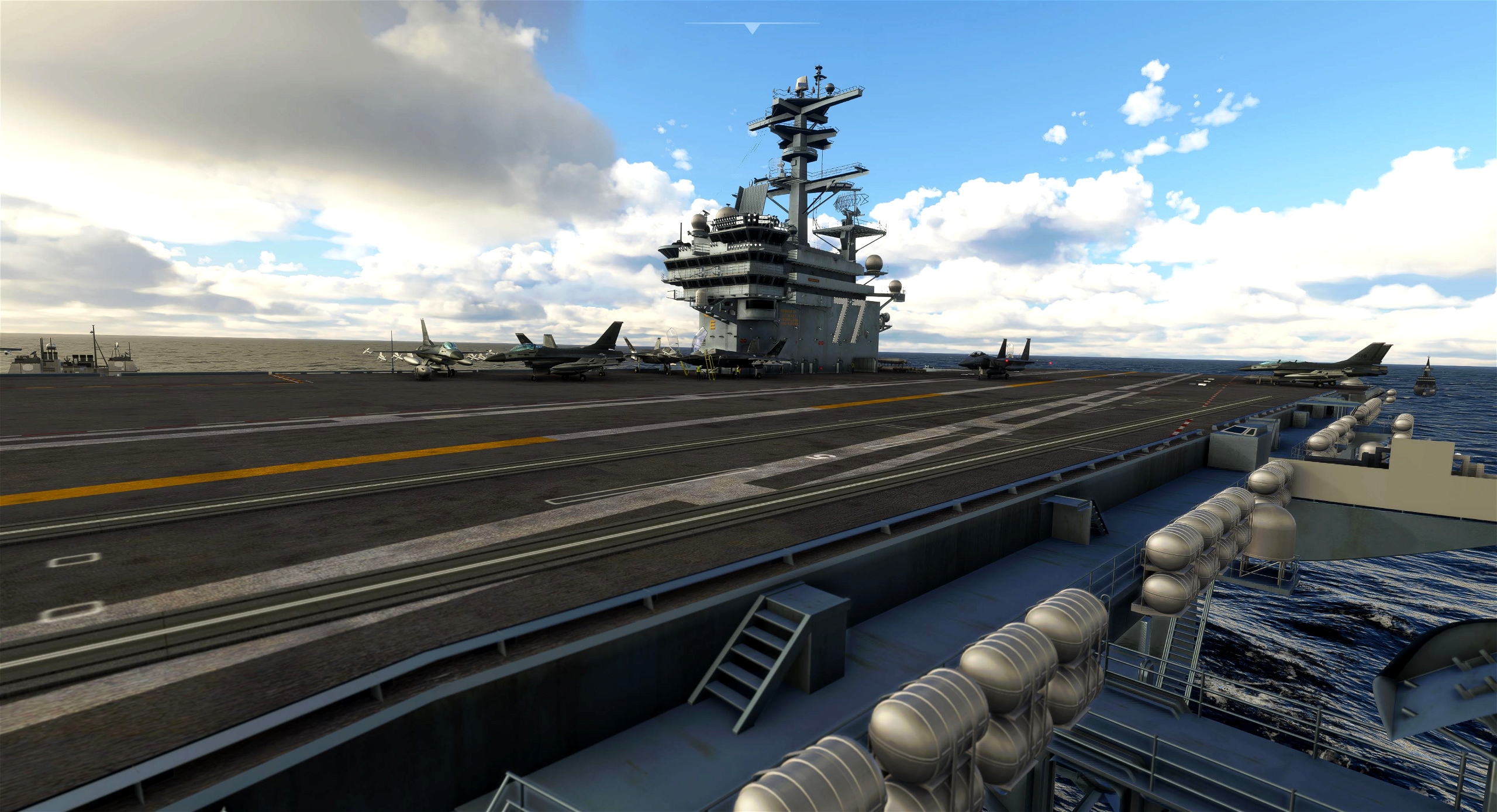 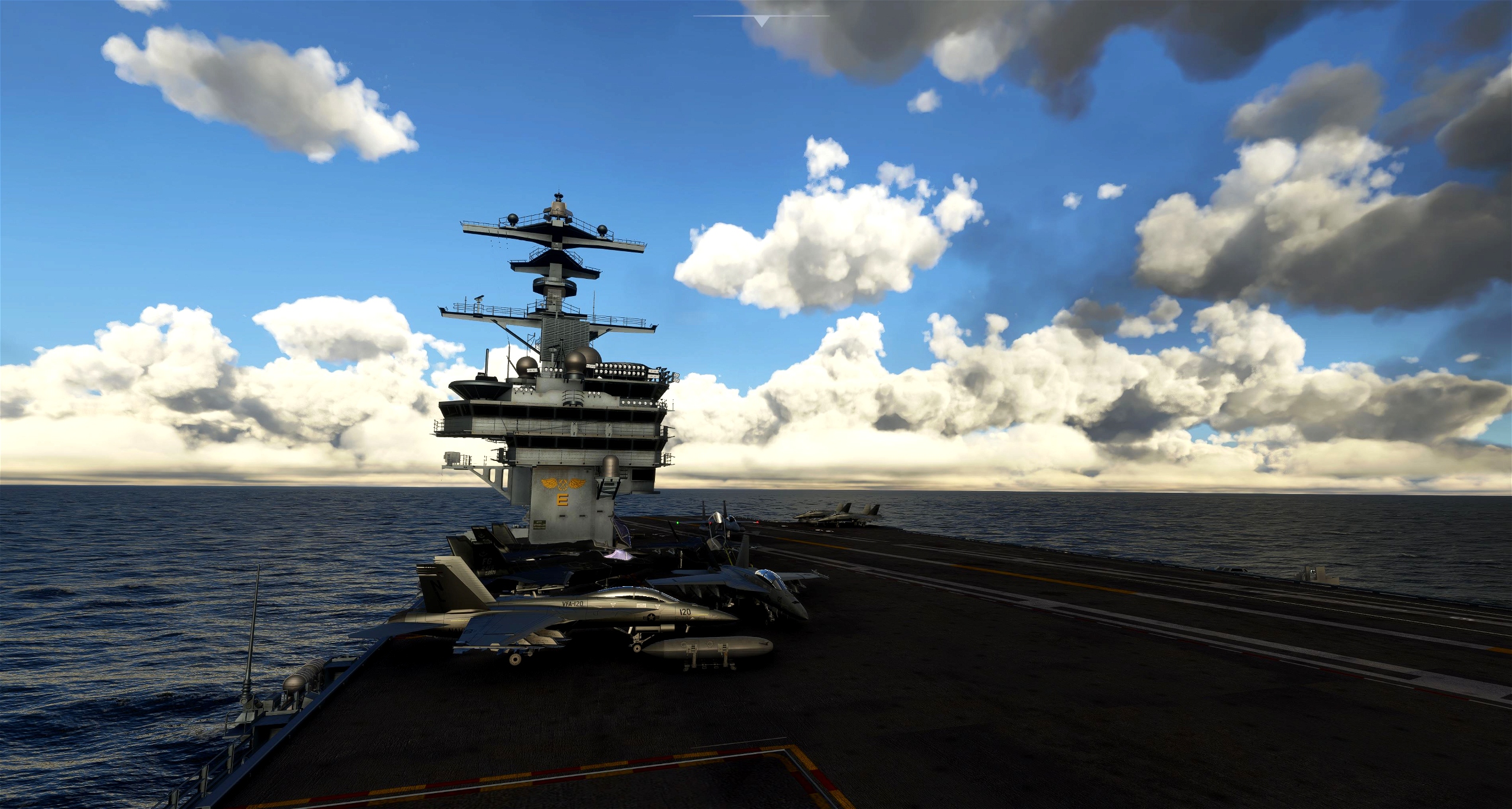 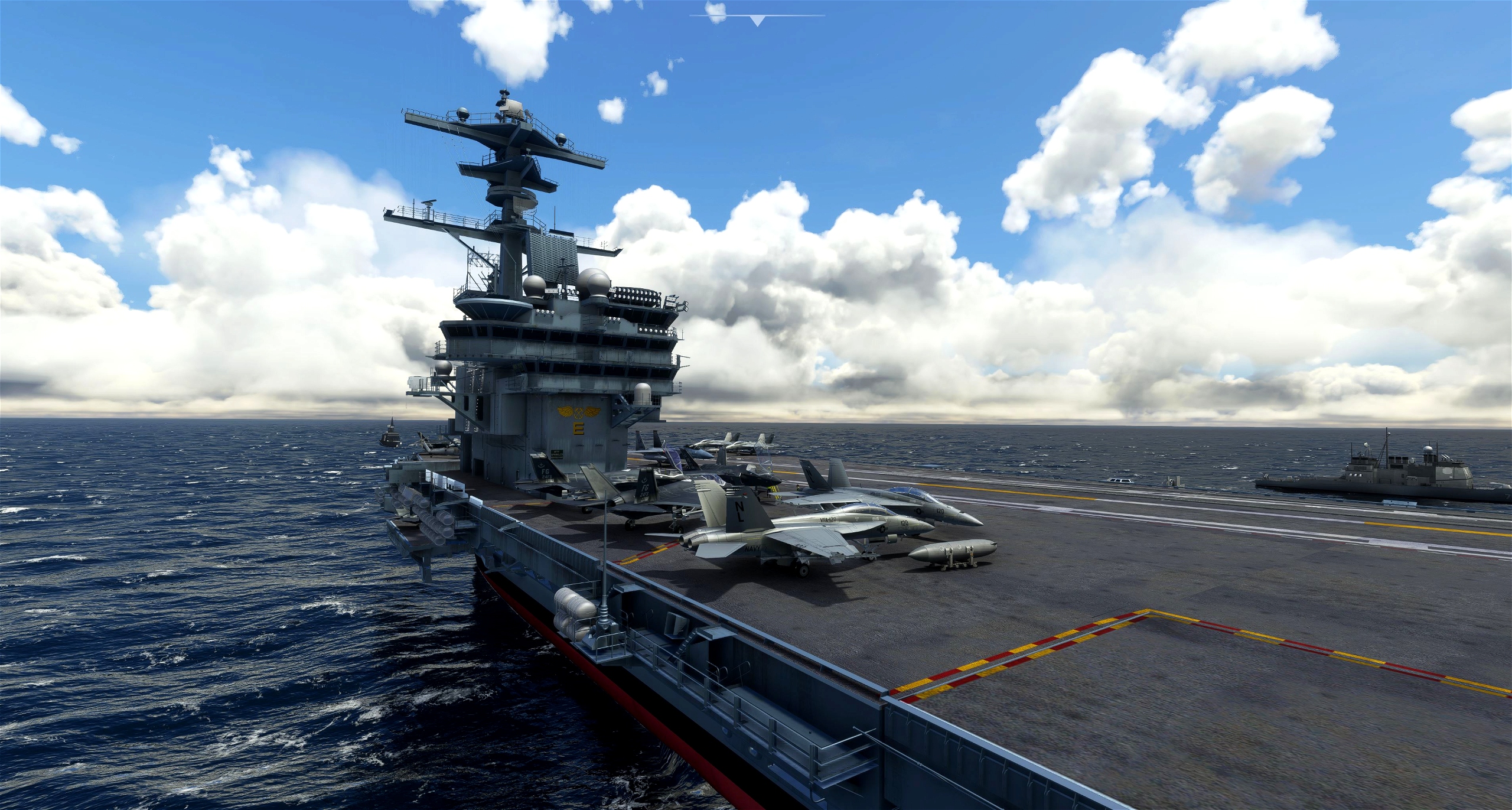 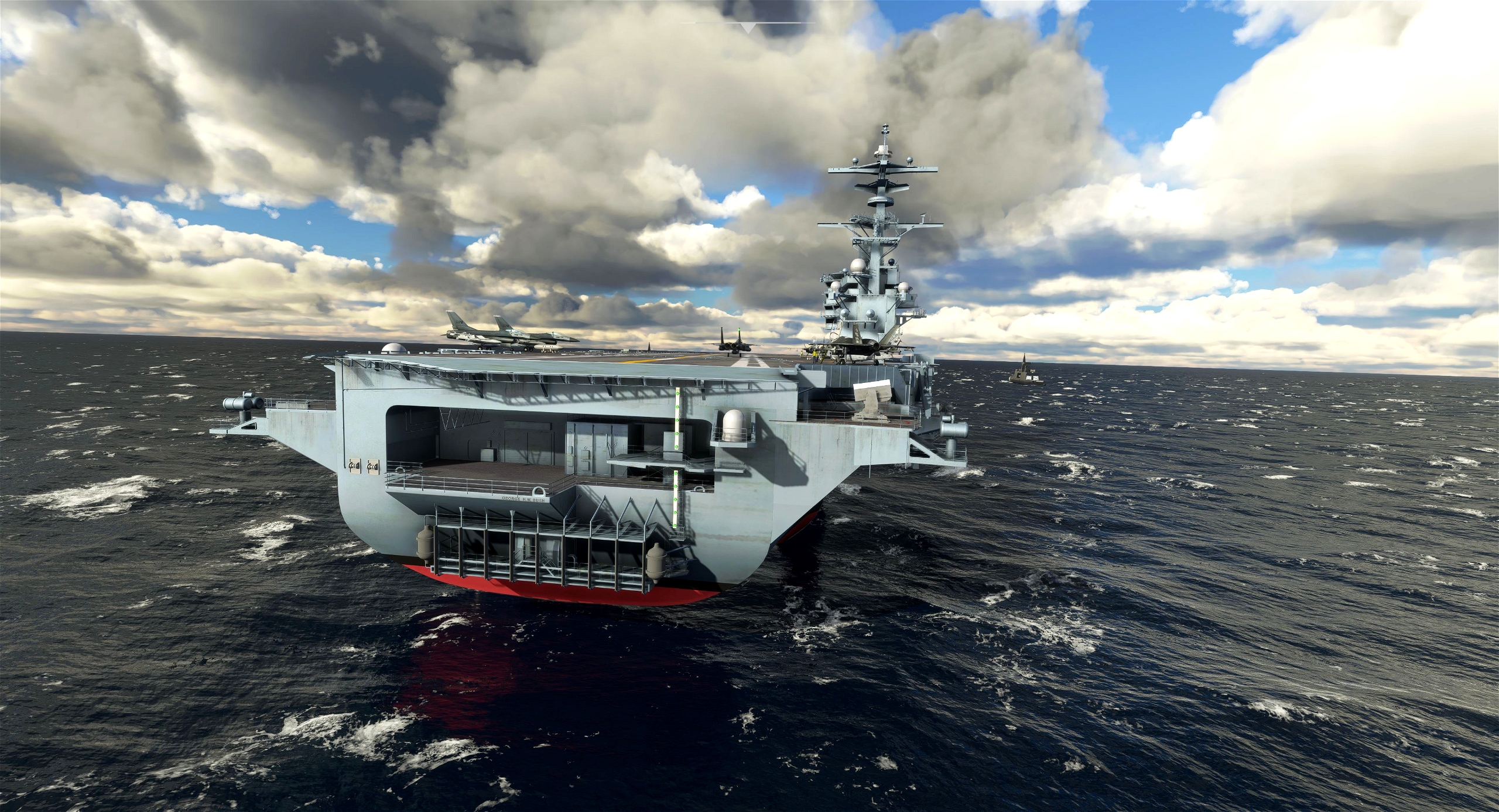 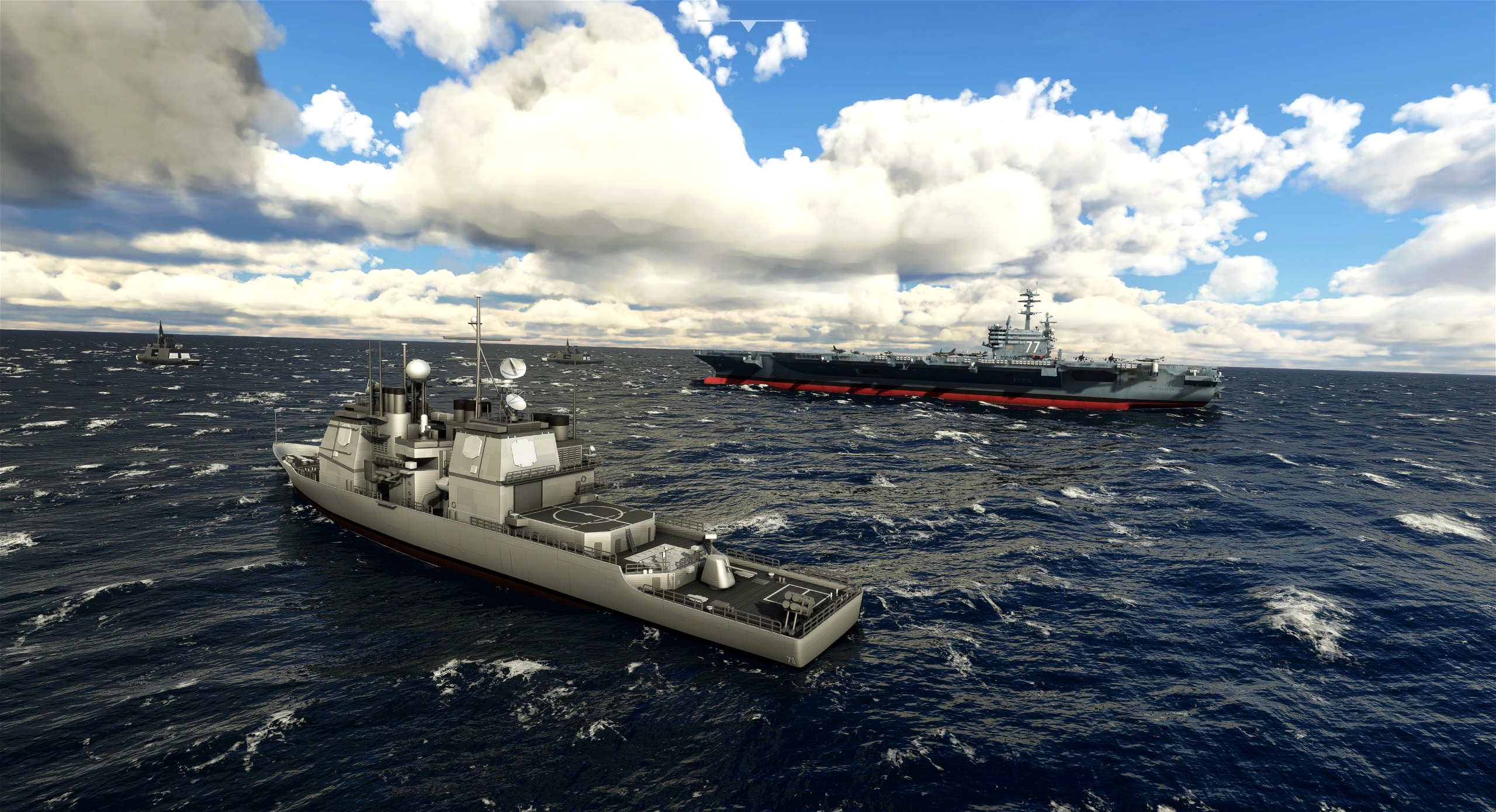 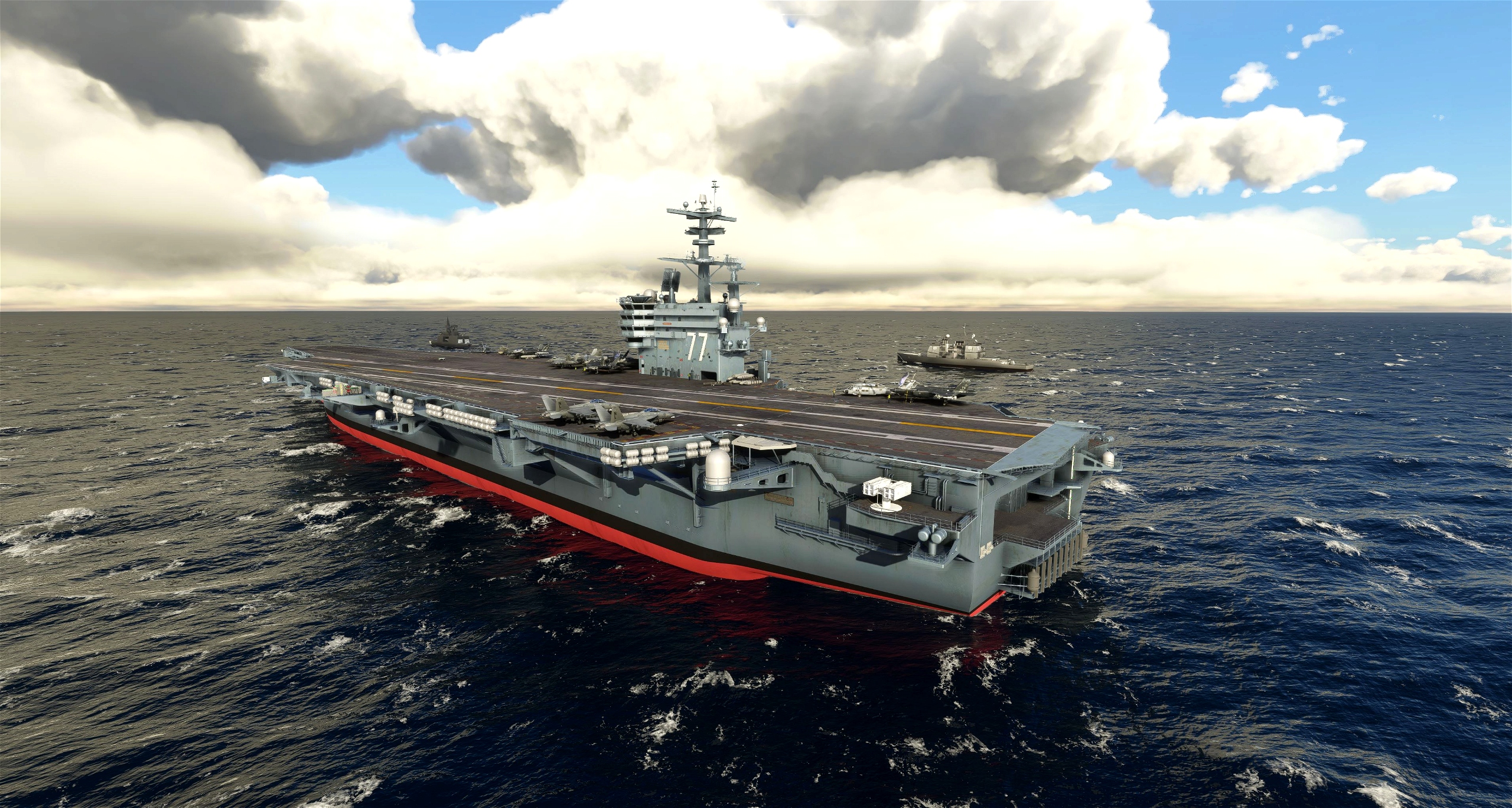 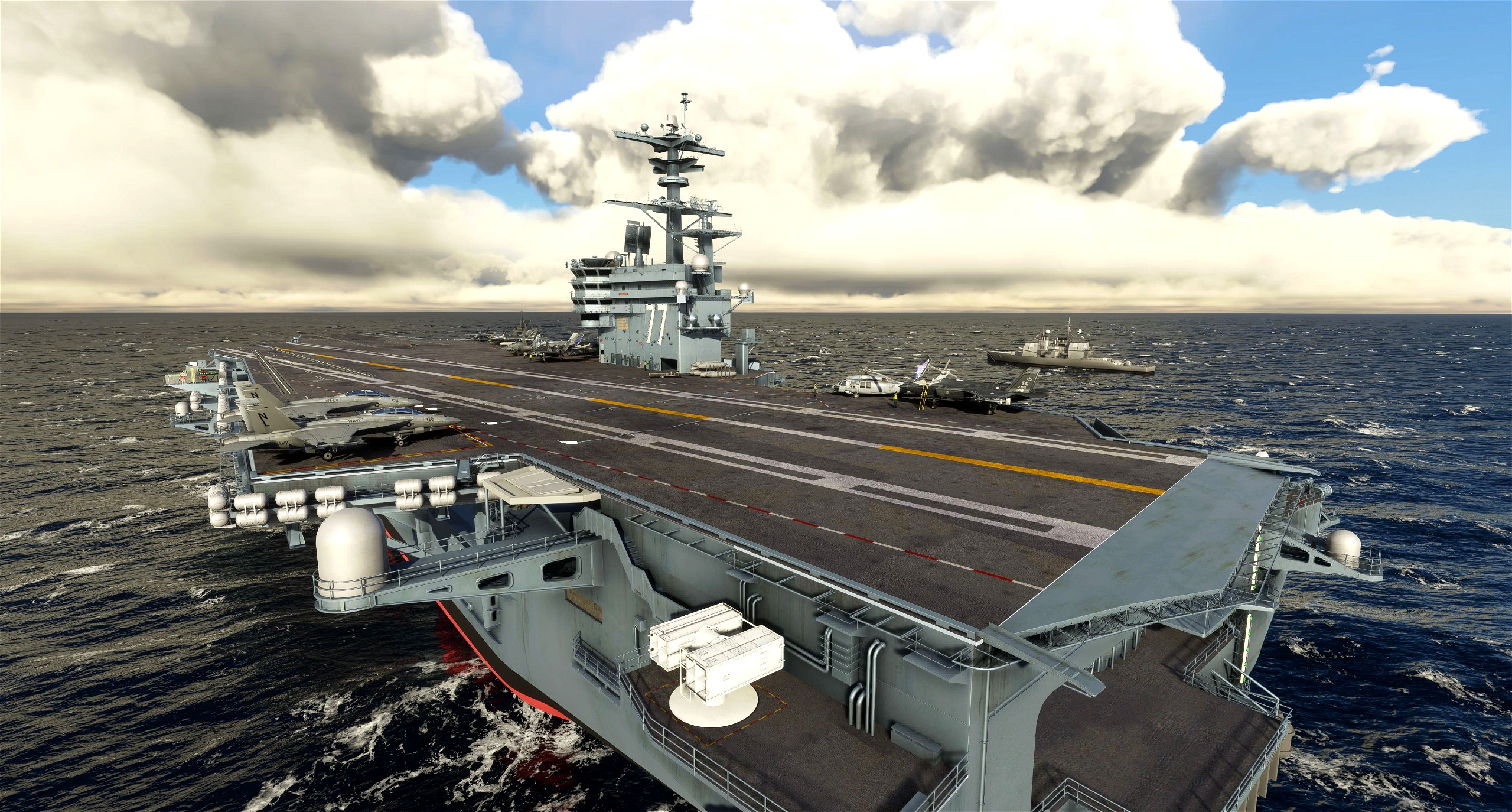 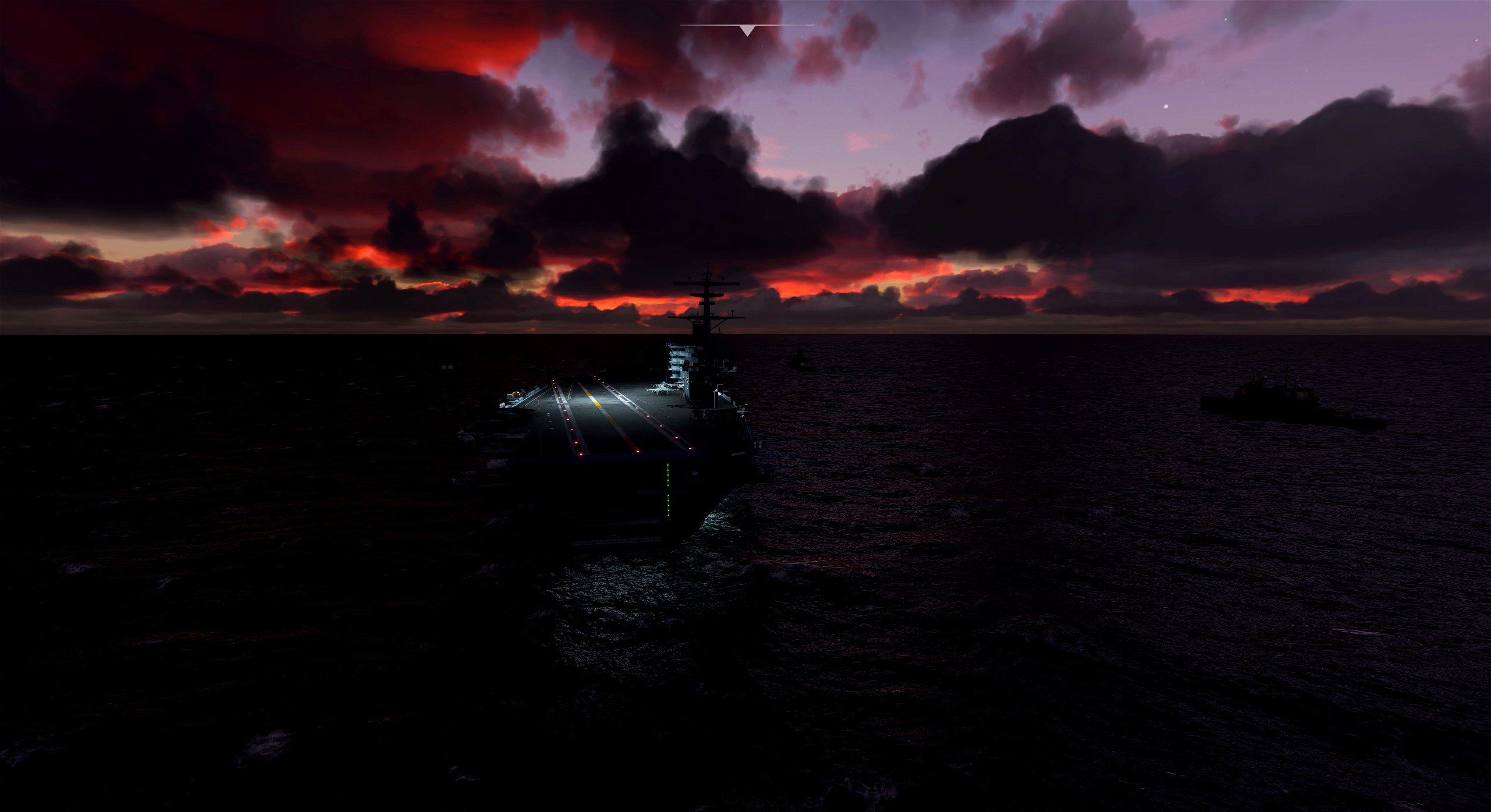 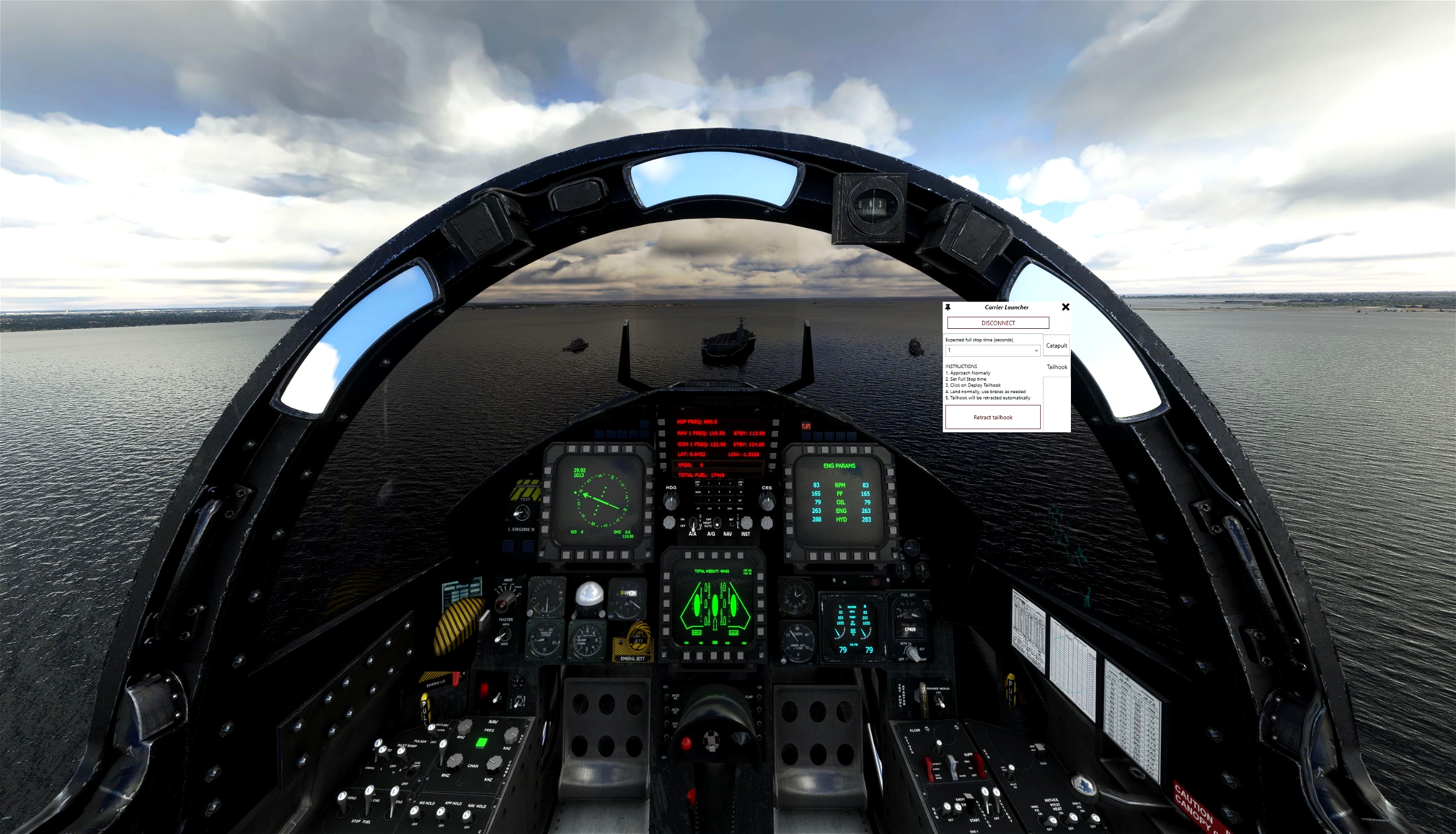 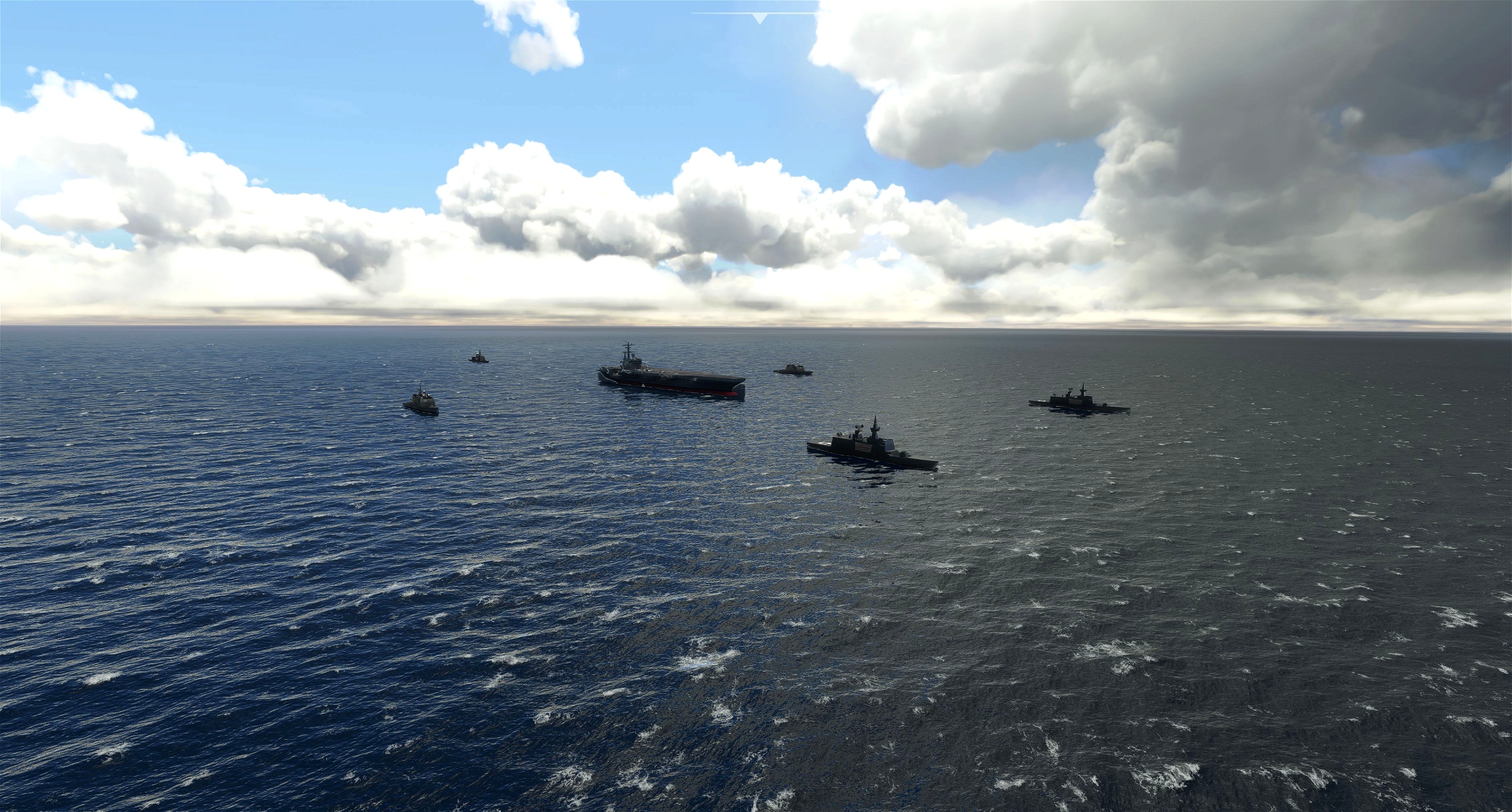 USS George H.W. Bush (CVN-77) is the tenth and final Nimitz-class supercarrier of the United States Navy. The carrier entered operations in 2009 and it currently operates from its homeport in Naval Station Norfolk, Virginia. We created a very detailed representation of USS George H.W. Bush functional with any aircraft on MSFS.

Out of the box, the product includes 7 static, spawnable locations. This means that the carriers do not move (MSFS limitation), and flights can be started from the carrier. The carrier will be visible as a starred scenery on your MSFS map. We have created custom

ICAOs for the different locations:

See the exact locations here: https://www.google.com/maps/d/u/6/edit?mid=1qL95dTj0eBUiAfBO1giLQkeR27z5t7DE&usp=sharing. We will add any location of your preference for free. Email us with the coordinates and your proof of purchase, and we will add a carrier to that location within 24 hours.

We include with the product a fully functional SimConnect kinematics software to simulate the catapult and arrestor dynamics on an aircraft carrier.

Our Carrier Launcher is a custom derivative of Kinetic Assistant by Touching Cloud, licensed under an MIT license.

Our product currently has a few limitations to take into consideration due to the current state of MSFS's SDK. 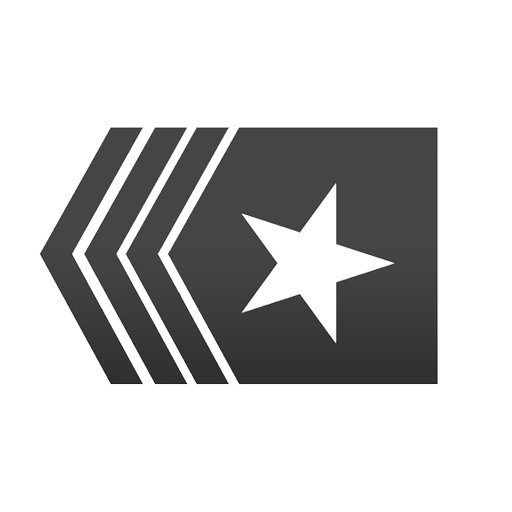 I bought this product when it was released and yes as stated in comments here it had a couple of cosmetic flaws at first but they were fixed very fast.

I sent a message to the creator about one of the cosmetic flaws and got reply almost at once with info about the fix. Top notch support.

I have both the Hard Deck carriers and the freeware ones found on this site and the Miltech carrier just is in another league detail wise.

If you want some carrier landing practice this is the one to get!

This is a joke right?

Folks, find the freeware carrier pack on this site and pick that up. It has animations and at least only naval aircraft on the deck. This is a blatant money grab.

I'm sorry, but this is very inaccurate in many aspects:

don't be sorry, your addon is very good, I bought it on another platform and I think you did a very good job and good price

When DCS covers the world, and does not charge ridiculous amounts for every product, plane/heli, and every map (that covers a very small area, then we can talk.

Developer contacted about this, but the ship is sitting way too high in the water.

we are working on that

Bought it - tried it - found it at Norfolk.. only with a landmass volcano looking thing for a tower.. I know what they did.. They used the (Terrain SDK) to make a hard deck.. I was able to (slew) an aircraft on top of the mud dobber looking thing (Tower) for a bit until it fell off.. A total trick by a 12 year old.. like the Hurricane reporter say's .. "You would have to be a total idiot fool to be out here where I am.. Don't do it!"

Only the "north" runway is solid, always spawn to the north runway (which is selected by default). This is so the simulator starts you on top of the aircraft carrier. The complete carrier deck is a solid surface. This is currently the only workaround to this issue, as the SDK does not permit runways to be at any other than Ground level. Once you start on top of the carrier, you will stay there.

What is different about this carrier module compared to Hard Deck Simulations version? Has anyone put a video out on this yet?

I don't own the produt by Hard Deck Simulations. But we focused on extremely detailed modeling of the carrier, multiple locations around the globe, and we offer placing the carrier on any location of your preference on demand.

Btw. does it work in VR mode? I see 2D window for the placement and settings of carrier. Is it visible in VR too?

I'm not too sure. Unfortunately, I have no way of testing this. If you can interact with software external to MSFS on VR mode, then yes, it Is compatible. Otherwise, no, and any other software that uses a SimConnect module won't be compatible either.

Looks nice BUT - pls change models and those screenshots here! F-16 and F-15 on carrier deck? LOL. Looks like ARCADE addon with those models for children only 😉 not for serious advertising and business. Sorry but its and a childish mistake that shouldn't have happened 😀 😀 😀 .

If I look at these pictures, I remove my finger immediately from the BUY button. 😉 I am afraid of the quality because of that.

The static models are F-35s and F/A-18s. The F-16s were removed (our bad, the explanation is on another comment below).

The F-15 is not static, but rather the aircraft I was flying when I took the screenshots.

So the static aircraft on deck are Tomcats and Hornets now? Chief

Thanks,bought it! I will be contacting you about a couple other locations that I'd like to have the carrier located. Chief

Can you give us an update on how this compares to the Hard Deck Simulation version?

This carrier is MUCH more detailed! Very nice! 👍

F14 F18 and helicopters thats all you can use it for

You could in theory use any aircraft, the sim would allow it. However, yes, in terms of realism those are the aircraft available at the time. Many more to come, though!

There's the T-45 Goshawk - they have done carrier ops (they have an arrester hook). Lots of images of them operating from a carrier are on the net. It's a great aircraft, too.

F-16 on Aircraft Carrier!!!! Is it a joke? For a payware it's not very profesionnal.

We are aware of this - we used models from a library that we had and missed the fact that F-16s can't operate on a carrier! We are working on an update for this though!

We are replacing the F-16s by F/A-18s, update releasing today.

Simulation model designer, Maryadi, is working on a MSFS version of his outstanding Osprey. It will be awesome!!

Looks nice, but is there a way to remove the USAF aircraft from the flight deck?? Navy Chief (Ret.)

MSFS doesn't allow for changes to be made after the scenery is compiled. We can send you another version without the aircraft, but there is no way of turning "on and off" the aircraft. If you decide to purchase, please send us an email and we will send you the version without aircrafts.